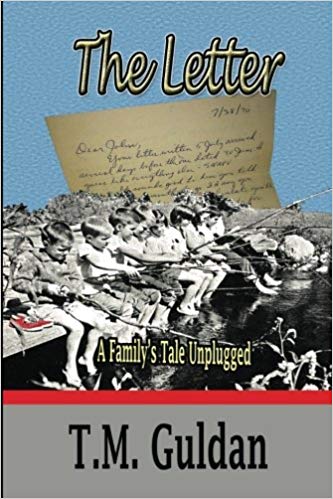 Adults
Registration for this event is no longer open.

Join us for some tea and light refreshments starting at 12:30.  At 1 pm T.M. Gulden shares her family story which begins in 2003, when two sisters find a thirty-three-year-old unopened letter. Their father had written the letter to their older brother, Johnny, who was killed before it arrived in Vietnam. And so this letter was returned home. They discover their father had kept it, sealed, for all those years.

The Letter, A Family's Tale Unplugged, goes back to 1969, when ten-year-old Terri enjoys a care-free life. Then, the Vietnam War brings turmoil into her family's life when her oldest brother, Johnny, decides to join the Marines and fight for his country. A short year later, two Marines bring news of Johnny's death.

The letters her brother writes home and countless interviews with family members long after his death bring to life a young warrior who left behind a void that can be felt decades later. Showing one family's struggle through loss and back to normalcy, The Letter is a loving and caring monument to the people who fought in the war zones of Vietnam and at home.

Books available for purchase and signing.